According to the Association of Fundraising Professionals, the majority of people will give to a charity only once a year. However, if charities are able to increase their retention rates by even just 1%, this can result in a huge increase in donations. Online technology continues to develop and flourish, giving charities new ways to interact with donors and by following some best practice, you could increase retention rates and therefore raise more for your cause!

Only 19% of first-time donors are retained and studies have shown that this is usually due to a lack of communication from the charity. People want their gift to be acknowledged, see the difference it has made and they want to know if the charity requires further support. If someone donates or volunteers, follow up with a thank you message. Thank you messages are crucial to getting donors to give again. A personally addressed message can be very easy to do, as you will have captured the name and email address of the donor through the information they have submitted when making payment for the donation.

You may choose to give an even more customised thank you note depending on the size of the donation, as well as the time and resources available to your team. There are numerous programmes that allow you to send personalised, automated content to donors, so make sure you research which is the best fit for your organisation. WhatsApp appears to be the preferred messaging service for non-profits, with an impressive 64% of charities using the app to message donors, which is more likely to be seen than an email or social media post.

In June 2017, Just Giving began using WhatsApp as a way to send thank you messages to their supporters. Not only were these messages effective at making the donor feel valued, but they also included a link to their website, leading those supporters back to their site and down the funnel to donate again.

Tip: Its essential that all organisations follow laws regarding marketing communications and legislationregarding data protection. For more inforead this blog with tips on GDPR.

Showing the impact of the money raised makes donors feel valued and helps them see that their money has gone to something tangible. Video is a very effective form of engaging with an online audience, as you can communicate a lot in a short space of time. Its important to delight donors soon after they first donate, as 63% of those that give a second time are likely to continue giving. Therefore, you need to focus on creating effective content to capture those second-time donors. The Infectious Disease Institute is a relatively small charity, with limited resources forcontent creation, but they were able to produce a humorous, personal video full of their achievements from the year, which they shared with their donors. The video was very effective, not just because they showed how much money was raised, but how effective the charity had been at spending the funds too, which is key.

Social media can be used as a means to thank and recognise your donors. Some donors would really appreciate a follow or public thank you message, which can easily be done by looking for their social media accounts or even capturing their social handles when they donate online. If youre going to thank donors on social media, it pays dividends to know your donor, as not everyone will want to be publicly thanked. Check with your donor first if they are happy for you to do so, some will appreciate a rise in their philanthropic status and its also best practice not to mention how much they donated.

Every month Sports Diver Magazine highlights a new supporter, their story and how their support has benefited others, as part of their #ProjectAWARE campaign. Its great social media content, that is personalised but takes little time to produce. The donor feels special, having been thanked in a very public manner and it also acts as an incentive for other supporters who will want to be featured. 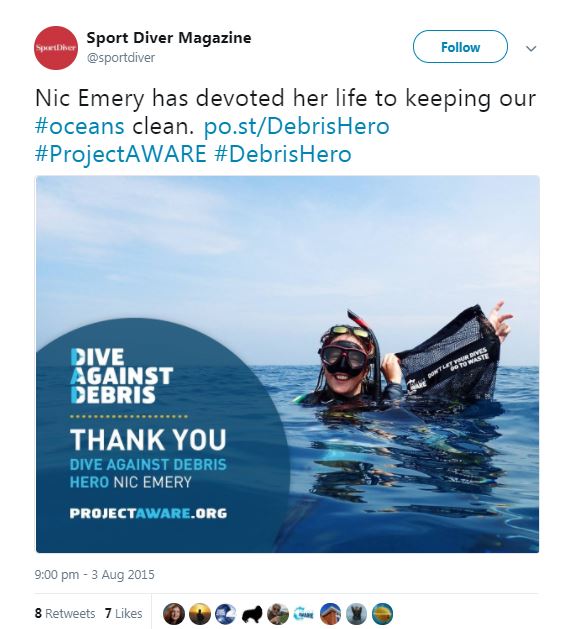 Using these tips will help to create a customised, personal experience that will delight donors and encourage them to donate again. There are also positive side effects such as increasing brand awareness if the donor shares your thank you message. Not only that, but the resources needed to execute these tips are minimal when compared to the amount required to acquire new donors or recoup old ones. Fundraising consultant Ken Burnett says “It takes the average charity two years to recoup the money spent acquiring a donor who gives about 5 a month.”

If youre looking for more best practice to improve your online fundraising, you may want to consider implementing YouTube videos into your fundraising campaign: