Home » Blog » Will An Auction Or Prize Draw Raise More?

Will An Auction Or Prize Draw Raise More?

Are you running an online campaign, but can’t decide whether to run an auction or prize draw? Both can work very well, but depend completely on the nature of the prize and the demographic of your target audience. We’ll talk you through the benefits of each so you can make an informed (and profitable!) decision.

Most of us know what an auction is, whether you’ve been to a silent auction at an event or placed a bid on an item listed on eBay; it’s when a user states the amount they would be willing to pay (a bid) and at the close of the auction the highest bid wins. It’s a great way for charities to raise funds, through donated or specially curated items.

A prize draw is very much like a raffle, where people pay a fixed amount to enter with the possibility of winning a prize, and they can also enter multiple times to increase their odds. The difference between a prize draw and a raffle, is that a raffle requires all parties involved to hold a gambling license, whereas with a prize draw you just need to offer people a free entry route. Here at Givergy, we give the public the chance to win for free by sending in a postal entry. As the money raised goes to charity, we find that less than 1% of entrants chose the free entry route, which is great news for the teams behind the fundraising initiatives.

Now you know the difference between the two let’s look at the benefits:

An auction is less risky as you start the bidding at the minimum amount you would be willing to sell at. Here at Givergy, if you run an auction on Givergy.com and that listing does not get any bids, then we don’t charge you a penny, which is great especially for prizes where the value is unknown.

With a prize draw however, you’re opening up your campaign to a multitude of people, which can help if you’ve ever faced backlash on social media for selling expensive items to millionaires. As a prize draw is more accessible for people of all incomes, it also means you’re more likely to get press coverage as there will be a buzz around the opportunity to win big for a small donation. This in turn will increase the reach of the prize and help you gain more interest, and entries (which means money!) but also increase awareness of your cause. It’s a win-win! Whilst a prize draw might have a wider appeal, it doesn’t necessarily mean that everyone will want to part with their hard earned cash, so they do require a lot of work. Just think, if entry is 5 and you need to raise 1,000, then you’ll need to sell 200 tickets. The prize needs to be truly money-can’t-buy and you’ll need to promote heavily. 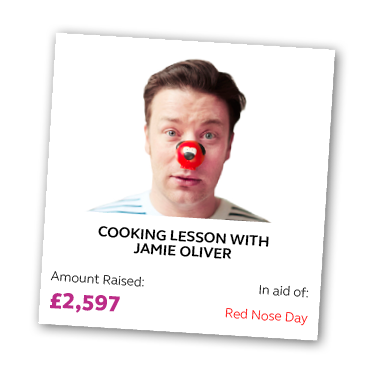 Comic Relief held a campaign back in March 2017 on Givergy.com to fundraise for Red Nose Day, their initiative that runs every other year alongside a TV show. In previous years the Comic Relief team had run an online auction with a different technology provider, but wanted to offer prize draws in order to enable people with smaller budgets the chance to support their cause.

Their campaign, the ‘Best Auction Ever’ comprised of 18 prize draws and 27 auction listings. Some of the listings were duplicates, running in both the auction and prize draw format, which enabled Comic Relief to delight their high net-worth donors and appeal to masses at the same time. 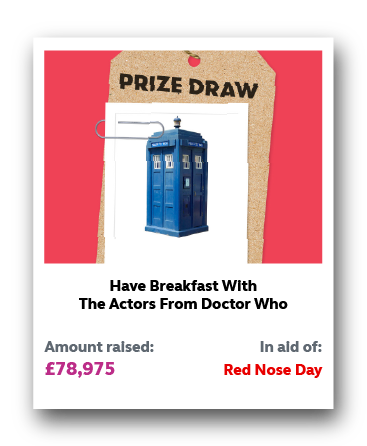 One of their incredible listings was to meet 7 of the actors who played Doctor Who, including David Tenant and Peter Capaldi, over a glorious breakfast at The Wolesley, London. The auction winner won the prize for 25,000, whilst the prize draw managed to raise a whopping 79,000. You might be thinking, well yes that’s great a prize draw is definitely the route for me, but we need to delve a little deeper into why this format raised more money. To raise this amount of cash the prize draw sold over 15,000 tickets, so you need to think realistically about your reach and whether your prize is so unique that people would be willing to risk losing money. This particular listing worked well in the prize draw format, as Doctor Who have an army of super fans across the globe, and by having various actors from different series participate also meant that the experience also appealed to a varied age group.

Next up, a cooking lesson with Jamie Oliver! Who wouldn’t want that right? Whilst everyone knows, and loves (and maybe slightly resents for the whole sugar tax thing) the Naked Chef, this experience worked better as an auction, raising 8,500. The prize draw brought in 2,500 which is still great, but might have been due to the fact that Jamie’s fans aren’t quite as die hard and are mainly based in the UK.

Next up is the lovely Ed Sheeran, who at the time of the campaign had multiple songs in the charts and was at a career high, along with a spectacular prize… Meet the singer at a gig AND he’ll give you a guitar he’s signed especially for you! The auction raised 15,000, but the prize draw again triumphed by bringing in 34,000. As his tour had sold-out and he was huge at the time, many people entered that weren’t necessarily super fans but knew it was the hottest show to be at. Risking 5 to go to one of his gigs would have performed well, but adding in a meet and greet, as well as signed memorabilia really took this prize up to the next level.

Whilst these examples have brought in thousands of pounds, you must remember that Comic Relief have a huge network, not only on their social media channels but they also have an army of celebrity ambassadors that repeatedly shared the listings throughout the campaign. Without the fans of these various well known individuals the listings would not have been seen by so many people and definitely wouldn’t have raised as much, so you need to think about what’s viable in terms of promotion. It’s also imperative with any prize draw that the celebrity involved promotes it on their social channels. Sharing a post from the charity or Givergy about the prize just isn’t going to cut it, as it’s more likely to be overlooked by fans, so ensure the celeb creates their own post (that doesn’t mean you can’t write the copy for their PR team) and they post regularly throughout the campaign so that as many people hear about the incredible prize draw as possible. 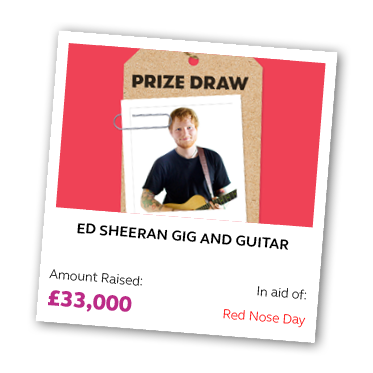 If you’re thinking of setting up your own prize draw, here are some rules from the Gambling Commission: